Captured by Feral Cats - the Sequel

When we sailed back to Baie du Prony from Noumea in June 2017 we had a surprise waiting for us at the dinghy landing. Liane's kitten; a tiny, shy, furry little creature that followed Liane as she came strutting out of the forest to greet us. 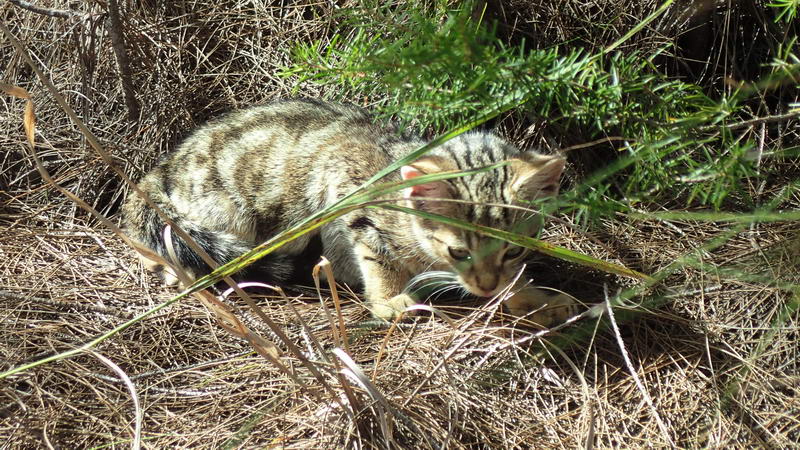 Freddy gently picked up the kitten and said,"It's so soft and flowing, like the wind. We should call it Keanu - like the cat in the movie - it means soft wind in Hawaiian."

Little did we suspect how our lives were about to change. 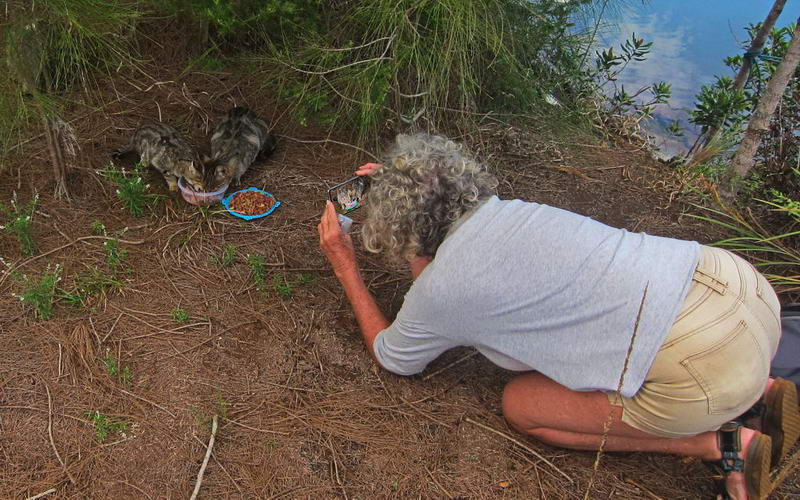 Anticipating the need to feed Liane we had stocked up on a variety of canned and crunchy cat foods and every morning Freddy prepared a meal for them. Keanu and Liane were right there at the dinghy landing every morning, ready for breakfast.

After breakfast, the games began.

Liane had to teach Keanu how to hunt and we watched as she gave wonderful lessons on attack styles - sometimes scaring the kitten - like this. 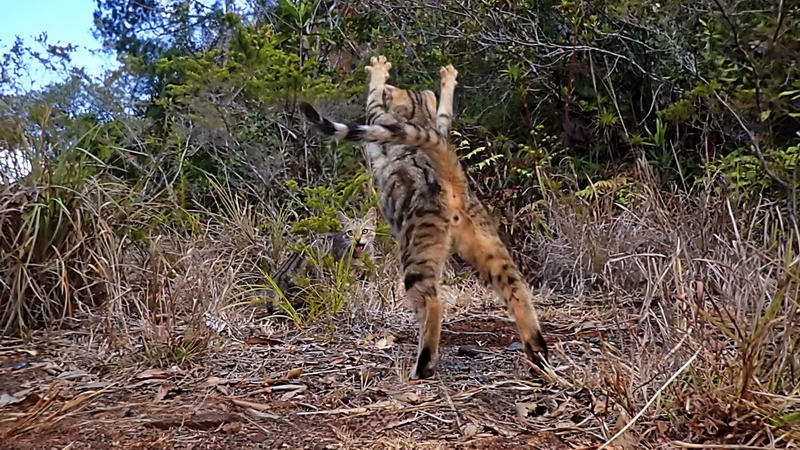 And then there were demonstrations of agility - we were not sure what the lessons were supposed to teach the kitten but they were pretty spectacular. 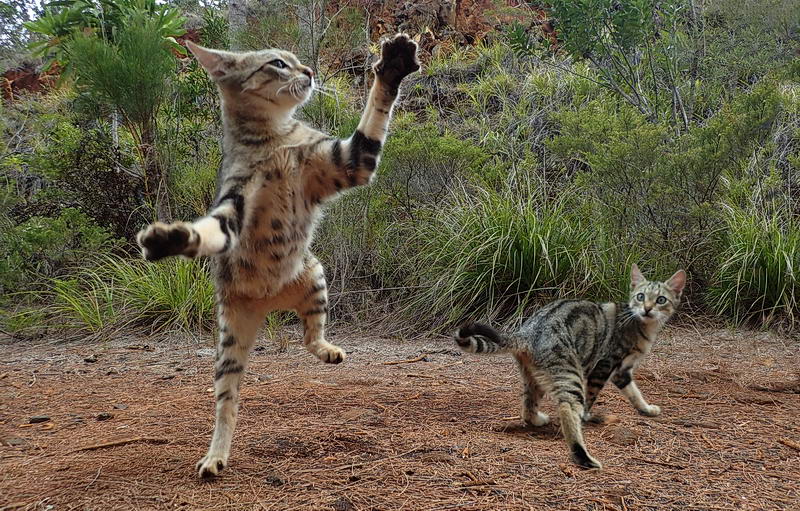 We could hardly believe the antics when the two wild cats got really inspired. 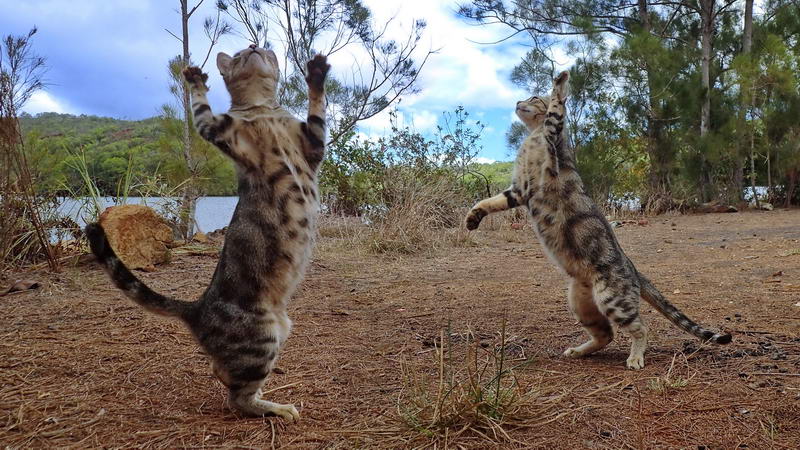 Keanu didn't need lessons climbing trees, he lived in a three dimensional jungle world and loved running up and down trees. On our daily family walks, Keanu often raced ahead of us and dashed up trees just for the fun of it. 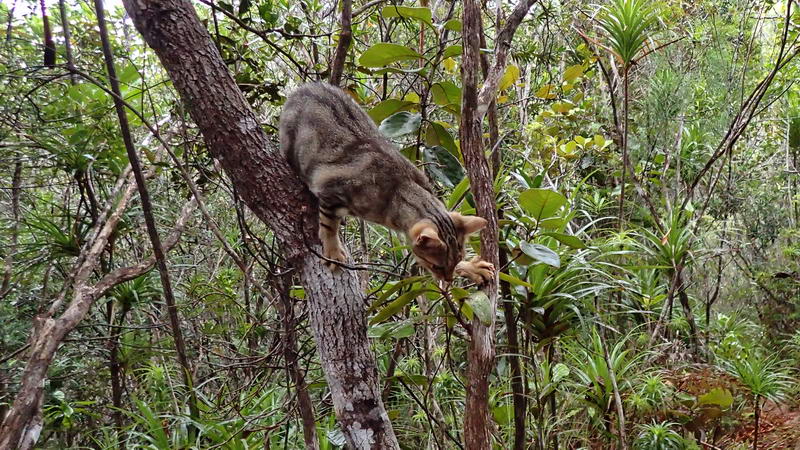 Both cats  look like "normal" house cats in the photos but they are actually very small. It's a question of photo angles and perspective. Here is Keanu in the foreground with his much larger mom, Liane, further back along the log in the forest. 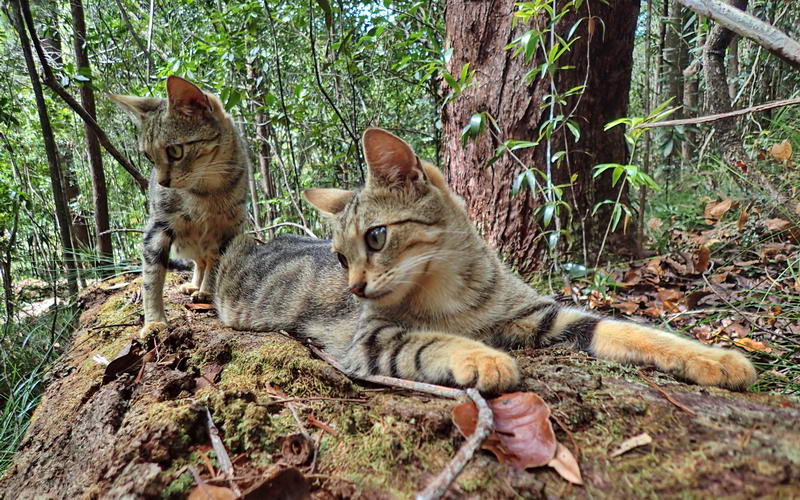 And here is Keanu with Freddy's hand. He's a tiny little thing, but smart. Freddy is teaching him how to Hi-Five and he caught on pretty fast. 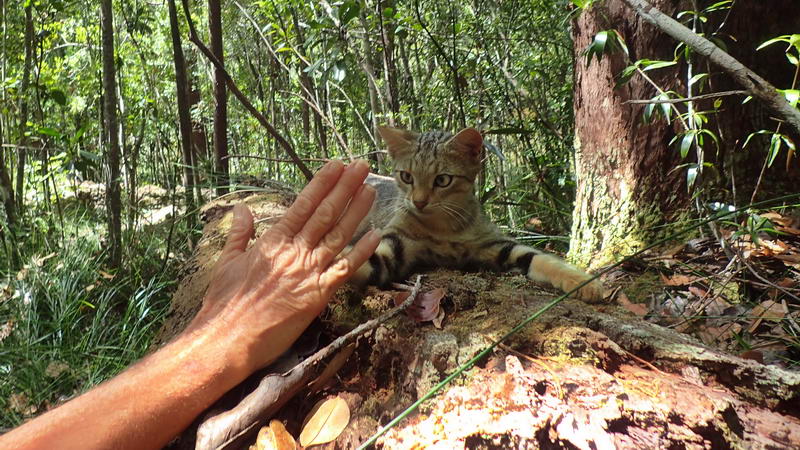 Keanu was contantly bugging Liane on our walks. Here he is attacking Liane's tail. 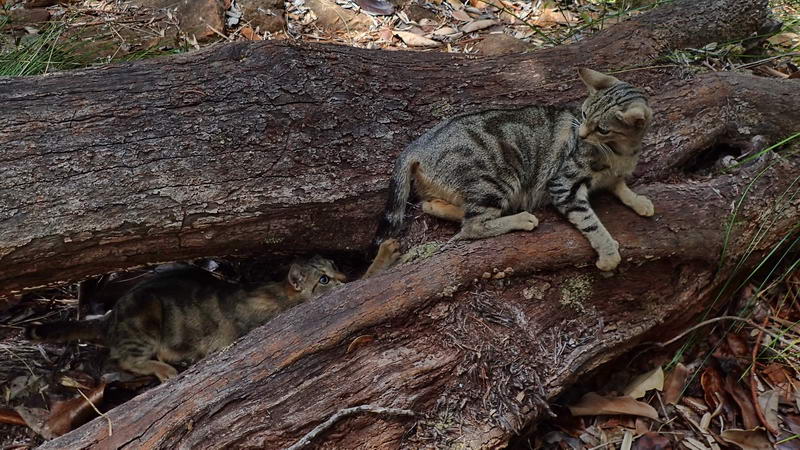 She would swat him from time to time but  the two of them were the very best of friends and did everything together. Partly, we think, because Keanu was no longer a "male". 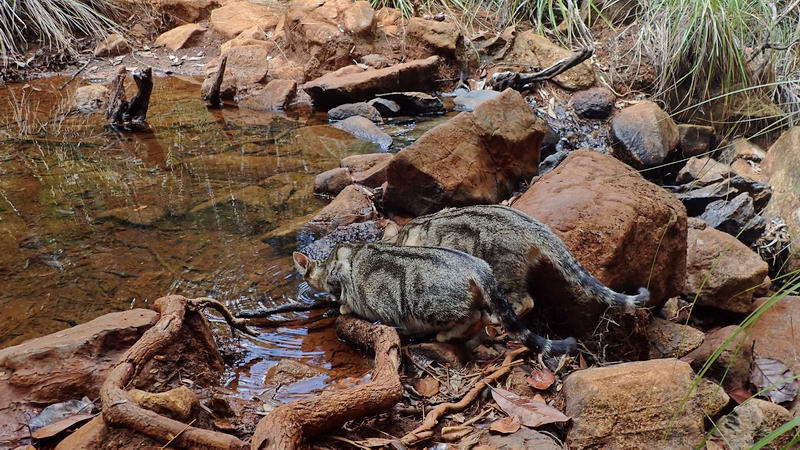 We had the good fortune of meeting Guy Kane, of the Clinique Veterinaire de Motor Pool in Noumea. Guy also has a sailboat and is active in neutering stray cats and dogs in New Caledonia. 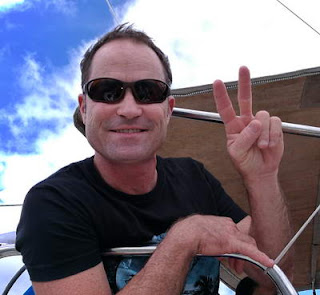 Guy visited Baie du Prony when the kitten was about 6 months old and castrated Keanu.

We tried to catch Liane so Guy could spay her.
Guy warned me that I'd better be careful when I tried to catch her, but after being friends with Liane for over a year I thought she's be OK with my putting her in the box.

Big mistake. Although Keanu didn't mind being picked up and held, Liane never liked to be picked up - snuggled, yes, picked up no. When I tried to pick her up and put her into Guy's cat carry box she went totally nuts. She's a LOT stronger than she looks and super fast and agile. It was like one of those cartoon cat fights; an exploding cloud of dust and teeth and claws and Rick and Freddy being tossed into the air.

Anyway, blue-eyed, testosterone deprived Keanu, became a very lovey, sweet, friendly pussycat and got along with his mom and everyone else - except for strangers and dogs. 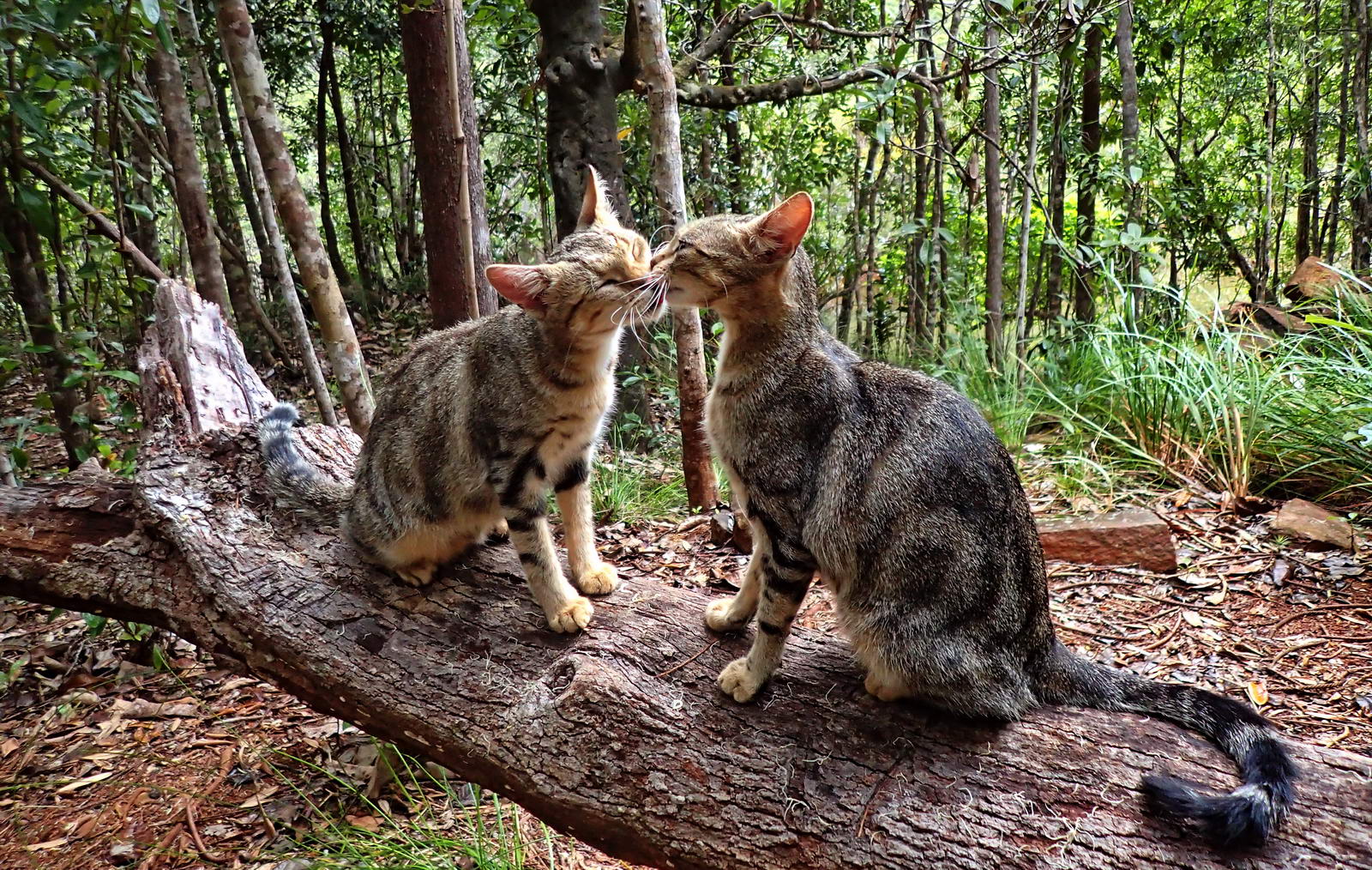 We spent many happy mornings trekking along the wilderness trails with our feral cat friends. It was sometimes kind of slow going as the cats liked to stop and rest when it was too hot and Keanu was constantly finding new things to investigate.

Here we are, next to a little creek in the jungle, with little Keanu giving Freddy a Hi Five while Liane waits patiently to continue the walk. 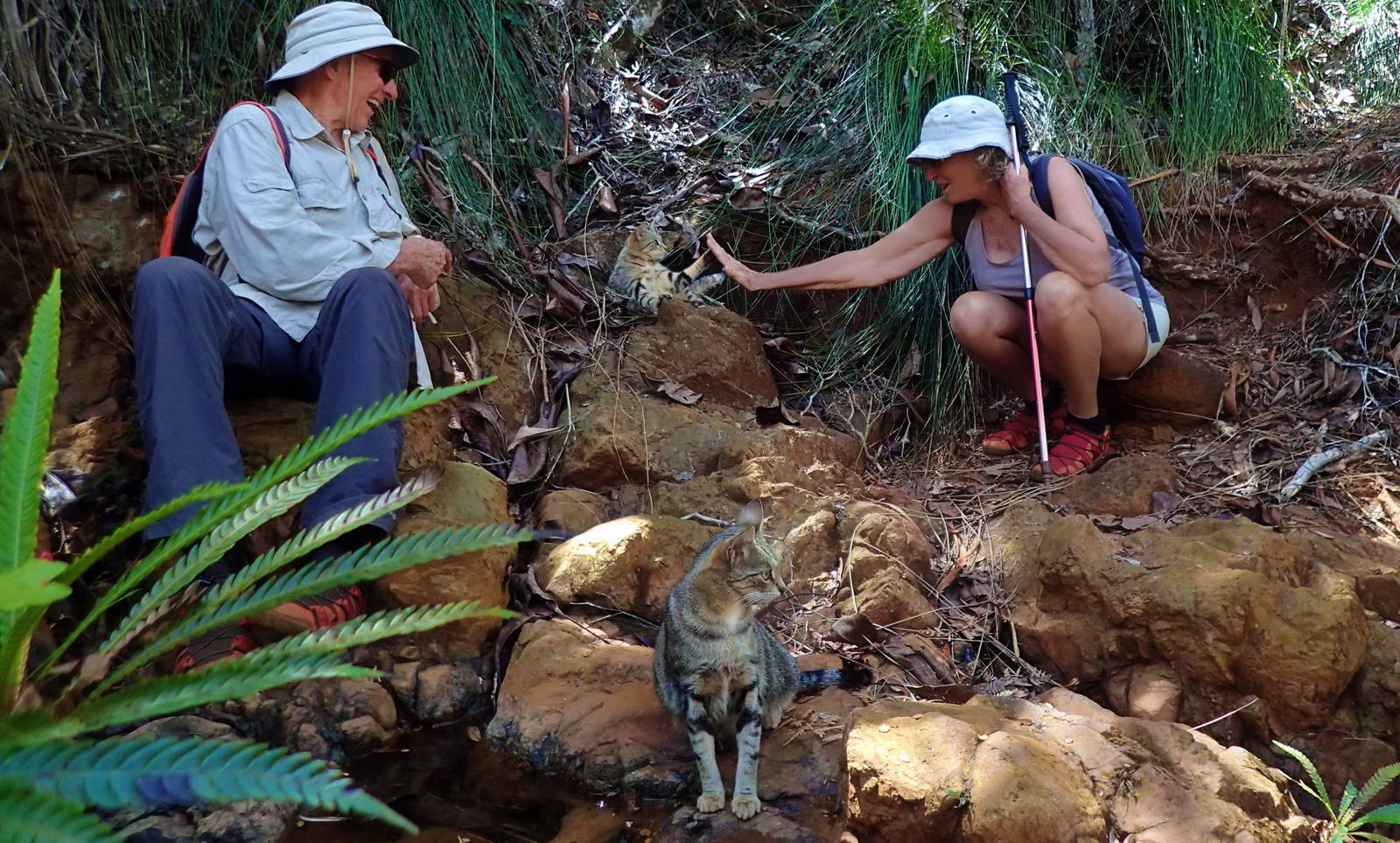 In September 2017 we noticed Liane was very pregnant - again.

Get ready for the third episode of the Feral Cats of Prony. 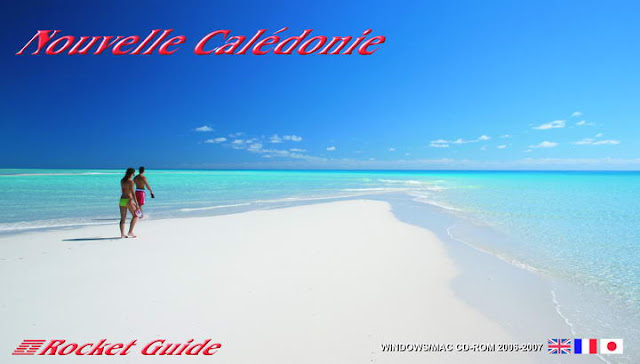 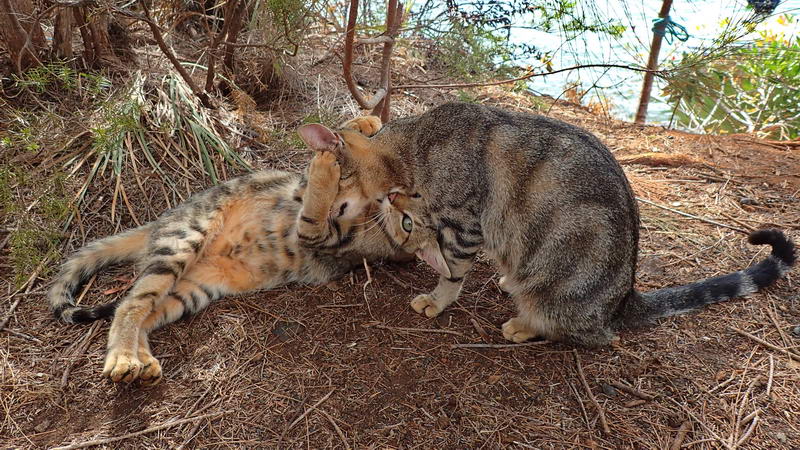